During our lifetime bone adapts to the daily maximum forces, which act upon it. These maximum forces cause small, elastic deformations of the bone (typically about 0.1% to 0.2% of its length). If these deformations exceed a certain threshold, it stimulates bone growth, but if this deformation is below a second (lower) threshold, the bone is resorbed. Examples of this effect are the bone loss in astronauts during long-term space flights and in old people when they adopt a sedentary lifestyle. Both will suffer from a function-related bone loss, which can be easily confused with a pathological osteoporosis. Selective Galileo Training can compensate for the functional bone loss.

Somewhat surprisingly, the maximum forces acting on bones are not created directly by external influences, but by the muscles themselves.

This becomes clear when one takes the typical leverage ratios in the body into account. A good example is the ankle. A healthy person hopping on one leg (like when using a skipping rope) generates a force, which is roughly equivalent to 3.5 times the body weight.  Mainly the calf muscle, obviously, generates this force.

If we consider that the ratio between the distance from the forefoot to the ankle and the distance from the ankle to the Achilles tendon that is attached to the calf muscle, is approximately 3:1, the calf muscles must generate a force that corresponds to 10.5 times body weight in order to produce a force of 3.5 times the body weight at the forefoot (ground reaction force). Since the calf muscle requires an abutment, this force must therefore also act on the bone. So during everyday movements a force of 14 times body weight or more can act easily on the lower leg bones. For a person with a body mass of 80 kg this would correspond to over one ton, i.e., the weight of a small car. 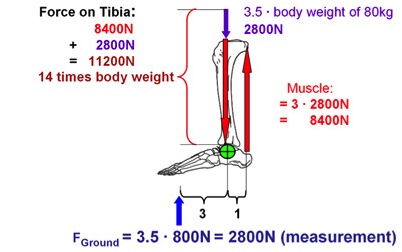 For comparison: Hitting the ground with straight leg, a force equal to typically 2 or 3 times body weight is generated. In this case, however, there is no leverage, so that the same force acts on the bone. This simple example shows that, normally, the contribution of muscle forces on bone is significantly larger than external forces.

The peak forces described above in a healthy fit subject result in a deformation of bone between 1000 µStrain and 2000 µStrain. In a tibia length (shin-bone length) of about 40 cm this corresponds to a deformation between 0.4 mm and 0.8 mm. This shows the magnitude of the impact of everyday movements in bone strength.

PAGES to read on GALILEO CONCEPT